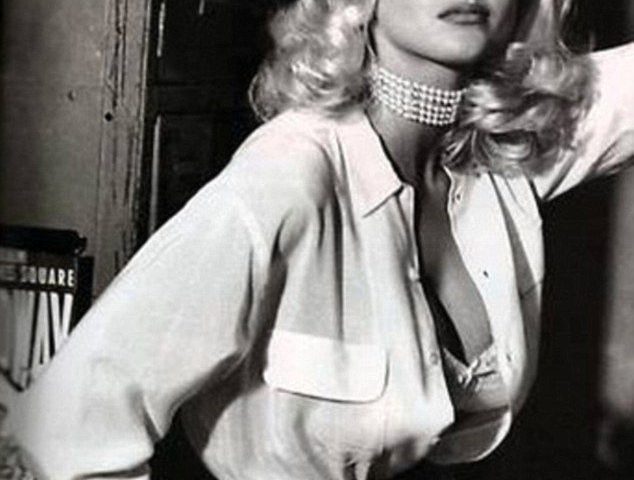 Anna Nicole Smith was one of the most iconic Playboy models of all time. Almost 11 years after her tragic death, GUESS Jeans U.S.A. is paying homage to the celebrated beauty with a new collection.

Did You Miss Me?

On February 8, 2007, Anna Nicole Smith was found dead in her bed at the age of just 39. However, the Houston, Texas-born blonde bombshell had built a legacy that’s still thriving today. The new Anna-inspired GUESS collection is set to launch January 17th.

She is famed as one of the most celebrated faces of GUESS Jeans of all time. In an effort to honor the life of Anna Nicole, as well as her memory, the brand is launching a new collection inspired by her.

It’s a collaboration between artist Cali Thornhill Dewitt and GUESS. The upcoming line is slated to feature the TrimSpa model’s famous GUESS campaign from 1992. Images from the campaign will be printed on the front of sweatshirts and tees. On the backs you’ll find the words:

GUESS Jeans U.S.A. is a division of the internationally-renowned brand GUESS. It’s dedicated to featuring past collections that were inspired by fashion, art, culture and music.

The most recent collaboration for GUESS Jeans U.S.A. is a partnership with Cali Thornhill DeWitt. He’s a Los Angeles, California-based director, photographer, designer and artist. This collaboration is dedicated to celebrating Anna Nicole Smith, one of Guess’s most legendary models.

You can find the Anna-inspired GUESS collection on the brand’s official website.

About the ‘DID YOU MISS ME?’ Brand

It’s a unisex collection which includes a t-shirt that retails for $90. The “DO YOU MISS ME YET?” sweatshirt is sold online for $170. Both come in white in black colors.

The awesome silhouettes of the model who mimicked the styles of Marilyn Monroe feature images of Anna Nicole during the 1992 GUESS campaign that launched her successful career. When asked about the campaign, Cali Thornhill DeWitt said:

“When I started talking to GUESS about working on a project together, my immediate hope was to revisit the queen, Anna Nicole Smith.”

What Made Anna Nicole Smith So Perfect for GUESS?

GUESS founder Paul Marciano still speaks fondly of the model to this day:

“I was crazy about shooting her. She had such a magnetic personality, but you could see that she was fragile.”

He’s the man responsible for changing her name from Vickie Smith (which he says he thought sounded cheap) to Anna Nicole Smith. Paul Marciano chose the vivacious queen because of her curves and Old Hollywood style.

The soon-to-be Playboy model’s curves looked incredibly sexy in a pair of GUESS blue jeans. Her 90s campaign turned her into one of the most famous faces of the brand for that time. She was an awesome sight to see hovering over Hollywood on billboards looking over the big city.

“At the time, Kate Moss was doing Calvin Klein, and she was 5’7″ and feminine and skinny. Anna Nicole was 6 feet tall and bigger than life with boobs and shoulders. I instantly thought of Anita Ekberg in La Dolce Vita. I thought, ‘She doesn’t even know how beautiful she is.’”

After her death on February 8, 2007, a custody battle ensued. The infant’s paternity was in question. Eventually, it was determined that Larry Birkhead was the biological father. The baby was then legally named Dannielynn Hope Marshall Birkhead, who is now 11 years old.

Dannielynn is a tween now, and she looks so much like her mom it’s uncanny. She appears to be very close to her father, Larry, who she’s seen with often in public. So, what is Anna Nicole’s Smith’s daughter up to these days?

Following in the successful footsteps of her mother, Dannielynn has become a GUESS model herself. At the age of six, the young beauty also modeled for the brand’s line.

Paul Marciano had the privilege of working with Dannielynn, just like her mom. When asked how she measures up professionally to her mother, Anna Nicole Smith, Marciano says:

“Dannielynn has the same playful spirit that her mother had on a set.”

Anna Nicole Smith was a voluptuous model with curves that just weren’t being featured by fashion icons at the time of her GUESS campaign. In time, she went on to struggle with her weight and other self-image issues.

This eventually led to a successful marketing and weight loss campaign with TrimSpa. In time, she gained the weight back, and continued struggling with it until the day she died.

But, that NEVER took away from her fashion sense. She’s always been stylish, yet extremely unique, making her a trendsetter of her time. Here are some of our favorite looks we’ve seen Anna Nicole sport over the years: