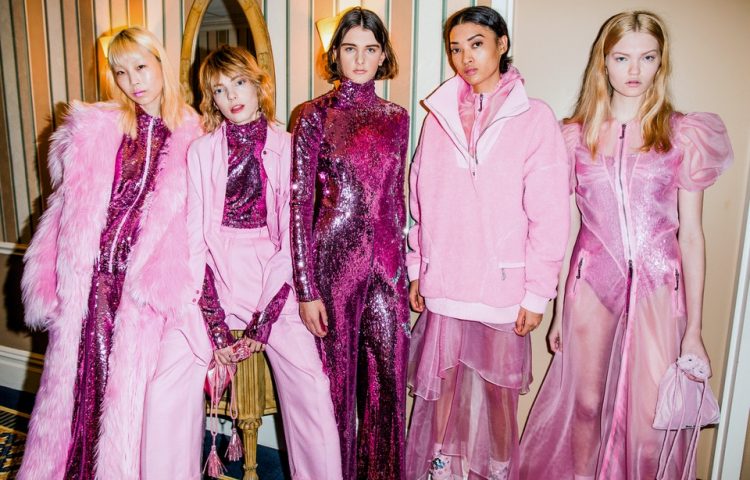 The Coachella 2018 music festival is here. Everybody get packing! This year’s event kicked off on the 12th of April with a bash hosted by Dior at Pioneertown Motel. He’s launching his new Dior Sauvage eau de perfume. Johnny Depp fronted campaigns for the fresh woodsy scent. This is the 2018 Coachella fashion report.

The Coachella Valley Music and Arts Festival officially brought out the Rock ‘n’ Roll this Friday. Headliners like Beyoncé, Eminem, The Weeknd and parties parked with revelers. All the fun wraps up after the second week on April 22.

This year at Coachella 2018, you can expect to see the following celebrities,

What to expect at Coachella 2018

At this year’s Coachella Valley Music and Arts Festival, be on the lookout for serious:

These are just some of the hot fashion trends currently happening at Coachella in 2018:

Pair up your head-to-toe Supreme and itty-bitty, Kanye West approved stunnies with a ‘90s inspired scrunchie. On April 11th, Scunci took its scrunchie game up a notch at the Lucky Brand Desert Pool Jam pool party. Here, they offered Scunci styles in an array of bold colors, metallics, velvets and meshes.

You can have yours personalized on site with patches, pins and rhinestones. This scrunchie look has been embraced by Kaia Gerber and Bella Hadid. They have been rocking half-up, half-down buns paired with the occasional scrunchies for some time now.

READ MORE:  Spring is Near

Pierced braids are really trending and making a show this year at Coachella. Metallic rings woven between plaits of a French braid are being spotted everywhere. From Ariana Grande to Shay Mitchell.

Chris Appleton, who wove metallic rings told THR last month that ribbons are equally taking the spotlight by transforming typical box braids to the next level. A Chanel ribbon from a Christmas present or anniversary gift can make you look fly with such awesomeness wrapped around your hair.

The shimmer is here to stay! And, Coachella is proof. Festivalgoers took this trend to a whole different level last year. They went all out dousing themselves with arts-and-crafts style glitter. If this is not your style, worry not, we got you covered. There is plenty of beauty products on the market now. All made for your skin.

If you want a look from one of Petra Collin’s girls, a shimmery looking shadow or gloss will do the trick. Craving the dreamy effect, use a product with a wet finish, like Glosser’s Lidstar or CoverFX’s Glitter Drops. Add glitter to it if you are feeling daring.

Makeup artist Hung Vanngo advises using an eyeshadow primer first. This is for the glitter to adhere to the lid. He warns against applying too close to the lash line.

This Coachella trend has crawled into the body products territory. The luminising body creams, oils and lotions like Rihanna’s Fenty Beauty Body Lava gives your skin that sticky wet sheen. You will end up looking like a Kardashian at any photo shoot.

Stylist-turned-designer, Jaime Mizrah has in just two months found favor with powerhouse performers. The likes of Lorde, Katy Perry, and Kacy Musgraves are all going crazy on her Juicy Couture’s fall collection 2018. A collection she showed in New York.

Mizrah says she looked into the late 70s and early 80s and ended up feeling very modern. This disco vibe did surely shine through. The head-to-toe bubblegum pink mockneck sequined jumpsuit worn by both Musgraves and Perry as they promoted their latest work. Musgraves was styled by Erica Cloud and Mizrah herself styled Perry.

Lorde chose a Princess Peach colored ensemble from the collection when performing during her Melodrama World Tour. She was styled by Karla Welch.

There is more amazing stuff in the collection. All of them worthy of an onstage appearance at Coachella in 2018.

On Wednesday, LA-based t-shirt and accessories company Local Authority launched a Coachella clothing line with Hawaiian dad shirts. They were sold out as soon as they landed at FWRD by Elye Walker and Maxfield.

But do not be discouraged, there is still a stash of unisex tees and baseball caps. They are emblazoned with slogans like “Hey buddy let’s party.”

The cool streetwear shop, Bodega, quickly sold out their t-shirts. Each tee had a giant pager on the front along with the subject “Beep, beep. It’s no big deal, just page me, baby.”

Celeb stylist Ade Samuel spilled the beans that Oakley brought back a version of their ‘90s-era Eye Jacket Shades. They were available just in time for Coachella.

She is also feeling updates on ‘90s style PVC jelly shoes by Jeffery Campbell. Her praise goes to the thigh-high plastic boots with transparent heels. They were on the Chanel Spring runway 2018. She recommends them for performers.

The studded jelly sandals worn by Gigi and Bella Hadid on the Alberta Feretti spring 2018 runway were an obsession. There sure will be buckets, hats and the omnipresent stew of belt bags by every fashion brand on the planet this year. They are a hands-free solution, so you can hold a tall cool one in one hand and raise your zippo lighter with the other one.

Everyone is anticipating whether Heron Preston will wear the $1,114 crystal-embellished orange fanny pack he’s been peddling.

How best to keep cool in the blazing Coachella desert if not some logo undies?

Maria Grazia Chiuri’s Christian Dior boy shorts and bralettes have been spotted on Sierra Miller, Bella Hadid and Charlize Theron. They are still available at the Beverly Hills boutique. The bralettes are going for up to $1,750 on resale sites like Poshmark.

Luxe streetwear is expected to heat up the desert as well as designs by Abloh’s label Off-White. The limited-edition sunglasses from his Virgil Abloh’s Off-White X Sunglasses Hut Collab just came out. The three $179 styles were shown at the brand’s fall 2018 runway show in Paris and launched on March 20th.

So far, they’ve been spotted all over Coachella 2018.

Heron Preston’s OTT streetwear is anticipated to be seen all over the festival as well. He has confirmed his attendance to a number of Coachella bashes on April 14th.

Tina Karen
The Pearl Source Blogger at Content Marketing Geek Corporation
Tina Karen has been a lifestyle blogger for some years now. She enjoys writing about things that truly matter, while homing in on what her audience needs. Ms. Karen also enjoys creating voice overs and reporting news. Tina is a Content Marketing Geek who blogs about fashion, style and trends for the Pearls of Wisdom blog by The Pearl Source.

what to wear Coachella. Coachella 2018