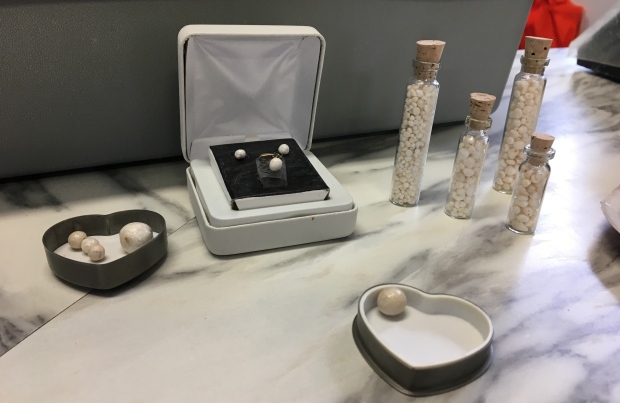 For the past four years, Karen McCavour and her husband have been fishing for scallops. When she first started, she had no idea whatsoever that these mollusks produce rare scallop pearls!

But, over the years, she’s found multiple scallop pearls, successfully growing her own gemstone collection. Just this January, she discovered a pearl of pretty impressive size. Since then, it’s been displayed as one of her most prized pearls.

Karen McCavour’s fishery is located on the Bay of Fundy. One of her crew members, Andrew Fowler, was shucking scallops while aboard the fishing boat. That’s when he discovered the large round pearl.

According to McCavour, most pearls go unnoticed because the shuckers are always moving so fast. However, this wasn’t the case here. She notes that she wishes she’d found the large pearl herself. But, she’s very pleased that Andrew Fowler not only found it, but that he gave it to her to add to her own pearl collection.

McCavour co-owns the scallop fishery with her husband, which is located in Lorneville, New Brunswick (Canada). There, she displayed the impressive pearl at their lobster shop. Not only is it one of the largest scallop pearls she’s found to date, but it’s definitely the nicest.

Scallops Are Mollusks… So, They Do Produce Pearls

READ MORE:  From the Classic White Pearl to the Exotic Black – A Close Look at Pearl Colors

Claire Goodwin is a Marine Biologist. She believes the process helps the mollusks fight off parasites:

“The scallop protects itself by forming this ball around this ball of calcium carbonate around the parasite.”

Why Don’t Most People Know About Scallop Pearls?

According to Goodwin, a good reason exists for why most people have no idea that scallops produce pearls… scallop pearls are extremely rare.

Scallop pearls are very similar to those produced by other mollusks, as they are made up of calcium carbonate. However, pearls made by scallops lack the luminous shine found in quality oyster pearls.

McCavour’s pearl collection also features her custom-designed jewelry pieces created from her discovered gems. This latest discovery, she said, is so close to flawless that it will remain in the family.