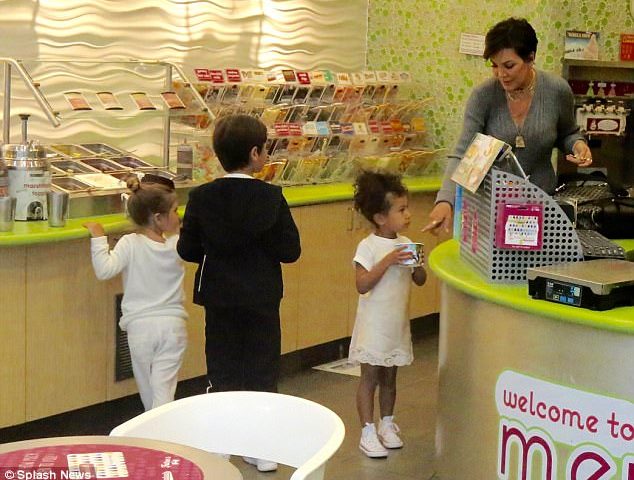 There’s nothing like becoming a grandmother, something Kris Jenner always wanted. Now, she’s getting her wishes. Kourtney, Kim, Rob and Kylie have already entered the world of parenthood, with Khloe right behind. There’s no stopping these reality TV stars and successful entrepreneurs. Now, we fans find ourselves keeping up with the Kardashian cousins.

Ever seen two little cousins hug? It’s one of the cutest, most endearing things you’ve ever seen. And, apparently, Rob Kardashian thought the same thing when he tweeted a pic of these two Kardashian cousins giving each other Saturday snuggles.

Isn’t that so adorable? I’m sure Rob’s 7.5 million Twitter followers thought so too. Check out his daughter Dream Kardashian hugging big cousin North West endearingly around the waist. North is the daughter and old child of Kanye West and Kim Kardashian West.

These two Kardashian cousins are just as cute as they can be, with North chilling in robe and fuzzy slippers on a Saturday morning. You can tell Dream loves her big cousin to death, as she looks up to you wearing a tiny pink tutu.

In a follow-up tweet, the Keeping Up with the Kardashians son added another photo featuring himself enjoying father-daughter time with his baby girl, Dream. These days, Rob is the Arthur George sock designer, and rarely takes to Twitter unless he’s being a proud dad… like when she learned to say, “Hi, Dad.”

Rob says he “literally can’t get enough” of his precious daughter. Last year, fans watched him go through many ups and downs with ex-girlfriend and mother of Dream, Blac Chyna. Today, the maturing dad openly admits that he’s never felt happiness or love like he does as a father.

Just nine days earlier, the world was semi-shocked to learn that Kylie had just given birth to a baby girl. She and rapper Travis Scott, who’s real name is Jacques Webster, named their new little bundle of joy Stormi Webster.

Baby Stormi was born on February 1, 2018 at 4:43 PM at Cedars-Sinai. So, far, Kylie, Kim, Kourtney and Rob’s kids were all born at this hospital for the stars. Stormi weighed in at 8 pounds, 9 ounces.

Kylie made it a point to stay out of the public eye during the last months of her pregnancy. She wanted to keep the pregnancy a secret from fans, for obvious reasons. TMZ caught up with her in late January. But, the stylish Kardashian was wearing a baggy black sweatshirt. So, her celebrity baby bump couldn’t be confirmed.

After she announced the birth of her first-born child, the Keeping Up with the Kardashians star apologized to her fans for keeping them in the dark about the pregnancy.

Keep watching until the end to get a glimpse of the very first digital images of Kylie Jenner’s baby. What a beautiful, precious addition to the brute of Kardashian cousins.

Video: Whatever Your Name Is Going to Be, This Is How I Found Out About You

Keeping Up with the Kardashian Cousins: What a moving video.

Kylie’s baby shower was filled with love and support as she celebrated the upcoming birth of baby Stormi. Along with her family and friends, Kylie dedicated this video to her unborn child, whose name hadn’t been announced yet:

thank you @wttyler for putting this together. here’s a little glimpse of the last 9 months. the link is in my bio ??

Just 2 ½ weeks earlier, one of the world’s most famous celebrity couples, Kanye West and Kim Kardashian West, welcomed their third child into the world. Born on January 15, 2018, via and unnamed surrogate, the new little Kardashian cousin is a true blessing for the couple.

Kim confirmed the surrogate was pregnant with her and Kanye’s daughter on Keeping Up with the Kardashians. According to reports, Kimye chose to use a surrogate after learning that Kim could bleed to death if she chose to carry another child.

When the baby was born, the proud mommy of three announced it on her website:

“Kanye and I are happy to announce the arrival of our healthy, beautiful baby girl.”

When baby girl West was three days old, Kim finally announced her name on her app. The bundle of joy, who weighed 7 pounds, 6 ounces at birth, is named Chicago West. But, the baby’s nickname won’t be “Chi,” as you might think.

Kim took to Twitter to explain exactly how the short version, or nickname, of Chicago West will be spelled:

“And to everyone who thinks it’s literally pronounced as CHI. No. It’s ‘Shy’”

We can easily assume that baby #3 was named after daddy’s home city, which he represents in his music with pride. However, Kimye say the name is actually a tribute to West’s late mother, Donda, who raised him in Chi-town as a single mother.

Keeping up with the Kardashian cousins is getting more and more interesting as all the reality TV stars help fulfill Kris Jenner’s grandmotherly dreams. To date, Kim Kardashian and Kanye West now have three beautiful kids:

Fans of the Keeping Up with the Kardashians show and Khloe in particular, have been hoping for the reality TV star to get pregnant ever since she was still married to Lamar Odom. But, it just never happened… until now.

Khloe Kardashian recently confirmed that she is indeed pregnant with Tristan Thompson’s baby. Unlike her baby sister, Khloe, it’s no secret either. The 33-year-old cutie proudly went on Snapchat and showed off her celebrity baby bump as her boo Tristan held her from behind in one of the sweetest pregnancy pic ever.

“My greatest dream realized! We are having a baby! I had been waiting and wondering but God had a plan all along.

He knew what He was doing. I simply had to trust in Him and be patient. I still at times can’t believe that our love created life!”

Khloe Gives Thanks to Tristan

Khloe Kardashian gave thanks to her Cleveland Cavaliers boyfriend for loving her so and treating her like a queen. Apparently, he knows what it takes to make a pregnant woman feel beautiful.

She also thanked Tristan for making her a “MOMMY!!!,” calling the experience magical.

Although quite open about her pregnancy now, Khloe did keep it under wraps in the beginning. She told fans that the couple simply wanted to enjoy the special moment between themselves, their families and close friends for as long as possible.

On February 6, the reality TV star took to Instagram to show off her growing celebrity baby bump, revealing that she was 29 weeks pregnant. When you calculate it, her due date seems to be somewhere around April 2, 2018.

“Baby mama KoKo! 29 Weeks and counting” as she cradled her stomach.”

My greatest dream realized! We are having a baby! I had been waiting and wondering but God had a plan all along. He knew what He was doing. I simply had to trust in Him and be patient. I still at times can’t believe that our love created life! Tristan, thank you for loving me the way that you do! Thank you for treating me like a Queen! Thank you for making me feel beautiful at all stages! Tristan, most of all, Thank you for making me a MOMMY!!! You have made this experience even more magical than I could have envisioned! I will never forget how wonderful you’ve been to me during this time! Thank you for making me so happy my love! Thank you to everyone for the love and positive vibes! I know we’ve been keeping this quiet but we wanted to enjoy this between our family and close friends as long as we could privately. To enjoy our first precious moments just us Thank you all for understanding. I am so thankful, excited, nervous, eager, overjoyed and scared all in one! But it’s the best bundle of feelings I’ve ever felt in my life!

What will Khloe Kardashian name her baby? Well, we can all assume the name will start with a “K” of course, just like her momanager Kris Jenner and her famous sisters. But, who knows, considering the other Kardashian cousins don’t have famous “K” names.

Last month, a Hollywood Life source revealed that the 34-year old mom-to-be is definitely not naming her baby in tradition of the “K” clan. Instead, there are rumors that she may name the baby Andrea or Andy, after Tristan’s mother.

From the beginning, Khloe Kardashian has been a doting mom to her three kids by ex-boyfriend Scott Disick. These days, she lives life as a single parent, after ending their relationship of 10 years in July 2015.

Throughout the reign of the Keeping Up with the Kardashians franchise, Kourtney has always been the “serious” one. Yet, she does have her ridiculously cute moments which we get to see on the show and her Instagram page. But, overall, she’s the dedicated mother who started the Kardashians cousins clan.

Kris Jenner on Keeping Up with the Kardashian Cousins

It’s no surprise that Kris Jenner is overjoyed about her kids having children. She now has eight grandchildren, with one on the way. And, she’s loving every minute of it.

In an interview with Entertainment Tonight, Kris said that it can be a bit overwhelming having so many grandkids, but she truly loves having such blessings in her life.

Momanager Kris gave her daughter Kylie some motherly advice about being a new mom:

“…enjoy every second of the first few weeks.”

When asked how she feels about her babies having babies, Kris Jenner said:

“When your babies have babies it’s magic. “It’s the best. The kids bring such joy and it makes everything worth it.”