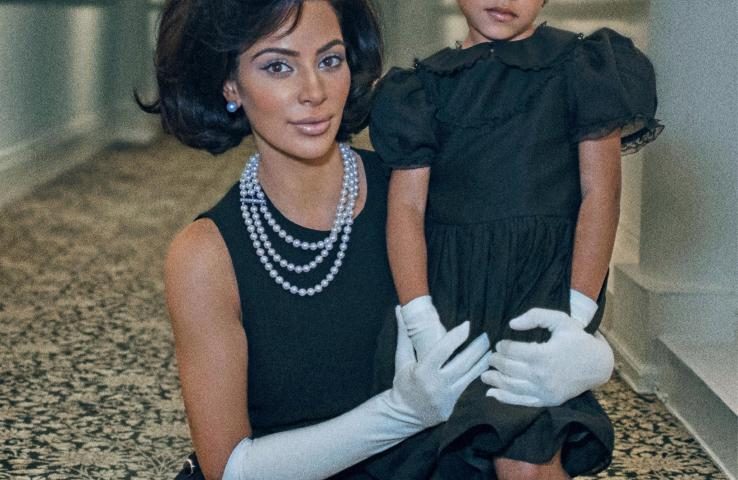 Kim Kardashian-West recently channeled Jackie Kennedy-Onassis during a photo shoot with her and Kanye West’s daughter North West. Pictures of the mother-daughter shoot were released recently by Interview magazine. They show the reality TV star wearing pearls in pure royal fashion. North even donned a pair of pearl earrings too!

Would Jackie Kennedy Be Please with Kim Kardashian?

This was the first joint interview ever, featuring Kim and North. It’s set to premiere in the next edition of Interview magazine. In the series of photos, 36-year-old Kim is captured all dolled up, just like the late Jackie Kennedy, our former First Lady.

In one image, Mrs. West is wearing a conservative cream dress and elegant-looking, elbow-length gloves. She’s even sporting Jackie O’s famous bob-style hairdo, as 4-year-old North stands behind her. The toddler looks adorable in a black dress with two pretty buns in her hair.

This photo’s caption touches the heart and soul of the second-born Kardashian sister:

“You can say a lot of things about me, but you cannot say I don’t work hard. I don’t sing. I don’t dance. I don’t act. But I am not lazy.” @kimkardashian talks to @janetmock for her September cover story. @stevenkleinstudio

Another picture features Kim wearing the iconic shades Jackie is so known for sporting. The caption the magazine created for this image reads:

Personally, my favorite is the image of Kim sitting on what looks to be a hotel hallway floor while North West stands next to her. Unlike the scantily dressed celebrity we’re used to seeing, Kim looks very elegant and classy in this picture, with her triple-strand pearl necklace and big pearl earrings.

And, I can’t get over how quickly little North West is growing up. She looks the part of a royal First Daughter in her black dress, black patent leather shoes, white lace bobby socks and huge pearl earrings, almost as big as mom’s.

Although some have found the photos to be classy, others have slammed the Keeping Up with the Kardashians reality star for copying the late-great Jackie Kennedy-Onassis. They found the images to be in bad taste, saying she has no right to channel the Former First Lady.

She received some serious backlash for her First Lady impersonations. One person wrote:

“She will never be a Jackie …. I’m over her fake ass lol .. over rated … let’s focus on what’s happening in the real world now .. tell her to go and help those who are in need now ( TEXAS )”

While another disgruntled social media user chimed in with:

“No we are not elevating Kim kardashian to the elegant and classic Jackie O. Both are iconic but in completely separate ways. This is shameful to Jackie’s legacy.”

#TheWadeWorldTour is one fashion hashtag that’s not going away anytime soon. It was created for and by famous actress Gabrielle Union-Wade and her husband, Chicago Bulls player Dwyane Wade.

Union stepped out to enjoy a night out on the town. She arrived at the rainy event wearing a black Prabal Gurung two-piece. What was so amazing about it? Well, it was embellished with boatloads of little bitty pearls.

READ MORE:  Are Pearls the Next Big Jewelry Statement? Judge for Yourself.

The Being Mary Jane star brightens up when she speaks of the numerous pretty white pearls she calls “little balls”:

Gabrielle Union’s looks are always lit, no matter the occasion. This is thanks to the hard work and dedication of celebrity fashion stylist Thomas Christos. And, this look is amazing. Nothing jazzes up a simple black pants suit like a million tiny pearls!

During a recent interview, the She’s All That star spoke about her trip with her husband to Paris Fashion Week. She told reporters that the NBA star created quite a stir when he stepped on the scene sporting a Thom Browne dachshund bag.

Although it was designed to model Hector Browne, the fashion designer’s Instagram-famous pooch, in the end, it’s still a purse. Gabrielle reflected on that day and noted:

“We had a battle for who would get the dog bag; he wouldn’t give it up.

I thought, because it was a purse, it was for me, and he was like, ‘No, why would you think that?’ He was very serious about the dog bag.”

Gabrielle Speaks on Being “Reasonably Woke”

Just like her character on Being Mary Jane, Union gets very charged when it comes to serious issues. She talked about the upcoming New York Fashion Week, and how it’s expected to be a politically charged event:

“If you consider yourself a decent human being that is reasonably woke, it’s our duty to our fellow man to give a shit. And if you can give a shit through fashion, awesome; if you can use social media to not only live-tweet Being Mary Jane but to support our Dreamers, awesome,” she said. “Especially in fashion, if you’re selling things, it’s important to let your consumer know that you give a shit.”

“I think everyone has a responsibility to stand up — fashion, Hollywood, everybody. This is not a time to be asleep.”