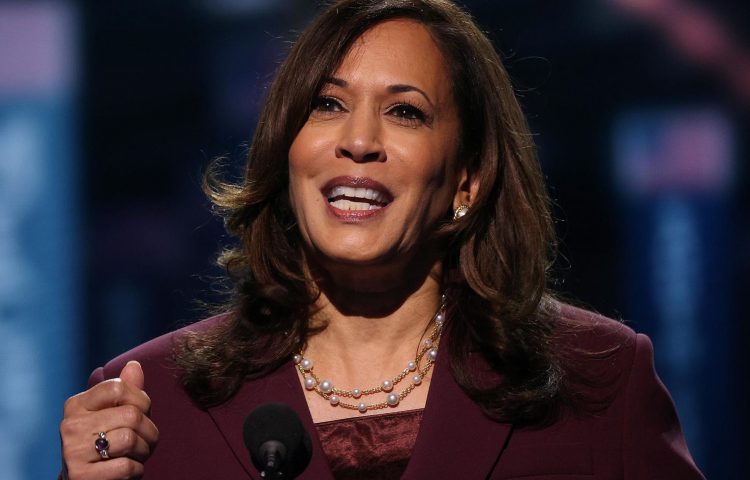 Kamala Harris made history when she became the first female Vice President in the United States. Her influence has extended beyond the Beltway and into the fashion sphere. The Pearl Source, one of the largest online pearl retailers, conducted a study among fashion authorities on Vice President Kamala Harris’ style.

We interviewed three industry experts to get their take on Kamala Harris’ distinctive style:

A graduate of the Fashion Institute of Technology, Jessenia is a jewelry designer with more than 6 years’ experience in the industry. Beginning with footwear and handbag design, she moved to accessories designer before transitioning to jewelry. Inspired by people, places and purpose, Jessenia founded Jevela Jewelry in 2018.

The Pearl Source is one of the largest online pearl jewelry retailers in the US and a member of the much-respected Jewelers of America. Leon was one of the first jewelers to move the business entirely online in the late 1990s. He is considered an international expert in jewelry pricing and distribution and frequently shares his expertise with Forbes, Harper’s Bazaar, National Jeweler, and Cosmopolitan amongst others.

Author and founder of Kamala’s Closet, Vittoria has written about fashion for over a decade. She holds a BA and MA in Art History and wrote her Master’s thesis on the use of fashion to codify women’s identities in the 16th century.

From her pantsuits to her pearls, Kamala Harris’ style has made quite the fashion statement along the route to the Vice Presidential office. Her trademark pearls have even launched social activist groups, including Facebook’s Wear Pearls on Jan 20th 2021 and United By Pearls, each with hundreds of thousands of members. Kamala’s distinctive style is elegant yet practical, modern yet timeless. Pearls are a key component of Kamala Harris’ style, and they have a long history in politics and power.

Kamala’s style has inspired not only trending hashtags, but designers and brands alike. The Pearl Source’s collection Power Pearls is dedicated to women who make history and inspired by Kamala Harris, whose style is on its way to becoming iconic.

Kamala Harris makes a statement with her stunning black Tahitian necklace. If you’re ready to step up the exoticism in your jewelry box and on the hunt for the perfect black gemstones of the seas, upgrade your pearl jewelry collection with lustrous Power Pearls. Gift idea: elevate your Christmas shopping game by opting for the finest pearls as gifts for your loved ones.

Pearls have always symbolized beauty, wisdom, and female empowerment. Kamala is blazing a new path in both politics and fashion as she balances modern fashion with relatability. Kamala Harris photos capture her signature suits, sneakers, and pearls. The combination conveys her distinctive style and can-do attitude.

“Her look can be distilled into a few key, identifiable things — namely structured blazers, Chucks and pearl necklaces, all of which are incredibly relatable pieces that most people have versions of in their wardrobes.” ~ Vittoria Vignone

Kamala Harris has worn pearls throughout her tenure as a politician, but her personal tradition dates back much earlier. She wore drop pearl earrings and a pearl necklace in her college graduation photo as a nod to her sorority, Alpha Kappa Alpha. Pearls are a powerful symbol for AKA. Founded in 1908 at Howard University in Washington DC and which happens to be Harris’ alma mater, AKA calls itself the ‘first Black Greek Letter organization for women.’ It also goes by the name ‘Twenty Pearls’ to memorialize the group’s original twenty members.

New members are given a badge with twenty pearls on it, indicating refinement and wisdom. It’s clear why pearls have such a sentimental meaning for Harris. Since graduation, Kamala Harris’ style has been to include a pearl necklace in virtually every significant event in her life. Pearls, while classic and feminine, can also be modern and strong. Between the stunning black Tahitian pearl necklace she wore to her inauguration as US Senator in 2017 and the bespoke pearl and gold chain she donned for to be sworn in as Vice President in 2021, she seems intent on pledging her lifelong commitment to her AKA sisterhood.

Pearls: A Long History in Politics

The gems of the sea and politics go back for thousands of years. They are the most mentioned gem in the Bible. Pearls symbolize virtue, tradition, wisdom, and strength. Cleopatra famously dissolved a priceless pearl in a glass of wine and drank it to prove she was the most powerful woman in the world. The fact that pearls have remained popular across the centuries and around the globe conveys their timelessness.

Pearls have long been part of the political uniform in the United States. Martha Washington adored her dove-shaped pin made from seed pearls, and regularly wore a double-stranded gold chain and pearl necklace. Mary Todd Lincoln wore a pearl necklace to her husband’s inaugural ball. One of the most popular First Ladies of the 20th century, the widely-respected activist and public speaker Eleanor Roosevelt had a fondness for a triple-strand pearl necklace. Likewise, Jill Biden is another big fan of pearl jewelry and often wears classic bracelets and pearl rings, cascading triple-strand necklaces, classic and elegant stud earrings or dainty drop earrings. Kamala Harris’ style has already proven her penchant for pearls in all forms from black Tahitian to classic white. As one of Washington’s most powerful women, she will continue to shape fashion and history with her choices.

In the US, wearing or carrying items that reference a political candidate, such as a Kamala Harris t shirt, is prohibited at the polls. In 2020, many voters donned their pearls to show their support for the Democratic ticket, but the love of pearls has extended long past the election season. While a variety of hashtags including #PearlsForKamala and #PearlsForRuth emerged leading up to election day, the #PearlsToThePolls tag went viral in November 2020, expressing solidarity for Kamala Harris, Ruth Bader Ginsberg, and 100 years of women’s suffrage. In fact, it has even been suggested Kamala’s necklace was a nod to Ginsberg’s signature lace collars. Women all over the country are wearing pearls as a reminder of their personal power.

READ MORE:  5 Mother of the Bride Dresses and Jewelry Pieces for a Timelessly Elegant Look

“She has an effect on how women of color, especially young women, see themselves.” ~ Jessenia Landrum

It’s likely you’ve seen the Kamala Harris t shirt that reads ‘Chucks & Pearls 2021.’ Her intentional style is resonating with women around the nation. The trademark pearls have been caught in many Kamala Harris photos, and Google searches for ‘pearls’ spiked around Inauguration Day. The ‘Chucks & Pearls’ Kamala Harris t shirt craze has caused a surge in interest in both pearls and sneakers. Decked out in her Chuck Taylors, Timberland boots or heels, Kamala proves pearls are as versatile as they are timeless. Kamala is a fashion role model in more ways than one. She is the first Vice President to wear Black American designs, including Pyer Moss, Christopher John Rogers, and Sergio Hudson. Her style is also notable for being eco-conscious. Harris wears her suits multiple times, sending a message of sustainability and economy. No disposable fashion here, better for everyone’s wallet and the environment.

“Everything Harris has custom-made comes from American designers that are most often people of color, women, or lesser-known designers. This idea of using her position to amplify others is very well-received among her fans and in the fashion community at large.” ~ Vittoria Vignone Pearls Are a Timeless Beauty

Pearls are perennially popular because of their simplicity and luminous, almost magical, glow. While pearls have never gone out of style, and, thanks to all the Kamala Harris photos, pearls are one of the hottest commodities on the jewelry market. As more people have become concerned with the destructive effects of gem mining including devastation of ecosystems, promotion of slave labor, and even war, pearls which are grown in more earth-friendly and sustainable ways are poised to outstrip diamonds in popularity. In keeping with modern trends, expect to see more contemporary designs like Kamala Harris’ style of pearl and chain necklace. As Jackie O famously said, ‘Pearls are always appropriate.’

“We saw designers use pearls on the runway for Spring 2021, and it’s forecast that pearls will be a popular jewelry trend for this year.” ~ Jessenia Landrum

The Scoop on Pearls

Pearls are the only gem grown by a living being. Like people, no two pearls are exactly alike. The formation of a pearl holds symbolic meaning as well. A pearl grows from a grain of grit which is transformed into a thing of beauty. Pearls are a metaphor for life. A moment is like a pearl: precious and unique. Pearls can be used to remind us to cultivate positivity. To paraphrase Chris Gardner, The world may be your oyster, but it’s up to you to find the pearls. It is no surprise that wise and important sayings are called ‘pearls of wisdom.’ Pearls are the birthstone for June, as well as the traditional 30th anniversary gift. As Kamala Harris’ style shows us, a woman can never have too many pearls.

The Queen of Gems

Other influential political women who love to sport their pearls include Michelle Obama and Hillary Clinton. The Queen of England wears pearls all the time, as does her granddaughter-in-law and likely future queen, Kate Middleton (who also has an affinity for mother of pearl pieces). The Queen of Talk Shows, Oprah, adores them, and so does the Queen of Pop, Rihanna. And we can’t leave out the Queen of Couture, Coco Chanel, who was single-handedly responsible for making pearls a fashion. Take Coco’s advice to heart: ‘Why wear one strand when you can wear two?’ These powerful women go for pearls every which way: short, long, single strand, multi-strand, chunky, dainty, traditional or freshwater pearls, so it’s impossible to find a style that doesn’t flatter and look fabulous. Kamala Harris figured this trick out a long time ago.

“There’s a great deal of variety in the kinds of pearls she wears. She’s worn white South Sea pearls, Tahitian black pearls, and Akoya pearls — It’s a mainstay of her fashion and really speaks to her classic sense of fashion.” ~ Leon Rbibo

Kamala isn’t all work and no play. She is at ease appearing in casual clothes including jeans, sneakers, and her power pearls. Her down-to-earth style makes her highly relatable and Harris’ pearls are always the main attraction when it comes to her jewelry. As a groundbreaking and historic figure, she is uniquely situated to inspire both designers and consumers. In just a few short months, Kamala Harris has made an incredible impact on fashion, bringing to light Black designers many had never heard of before. She is a role model for women of color, and young women in particular.

“She’ll get a little funky with the design, such as wearing a two-layered pearl necklace, or using gold wires, which is interesting. But she never wears something that overshadows the pearls — the pearls are always the main attraction.” ~ Jessenia Landrum

Harris shines in classic white pearls, and you can enhance your personal glow with a strand of gems of the sea. Lustrous, elegant, refined, Akoya Pearls provide that special glow for that extra special occasion.

For more information on Kamala Harris’ style, make sure to download The Pearl Source’s full study: ‘Kamala Harris – How Our New VP Is Impacting the Fashion Industry’.

Susan
Sue enjoys reading, writing, dark chocolate and her kids, although not always in that order. For some reason she lives near Baltimore, where she divides her time between her desk and the kitchen.

Latest posts by Susan (see all)