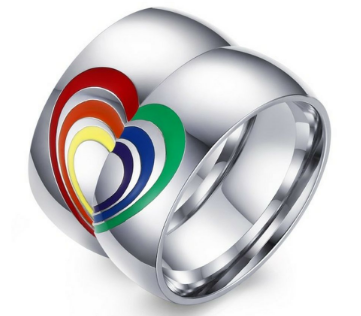 Traditional marriages are nothing like that of same sex marriages. These couples have traditions of their own that they choose to follow. They have mixed wedding parties, write their own vows, and many opt out of buying engagement rings. How is this effecting the way the wedding jewelry market works today?

Wedding retailers rely heavily on soon-to-be-married couples for their revenue. The wider the classes of people that can marry under the law the better it is for wedding retailers. Approval of marriage licenses for LGBTQ couples across the 50 states of the US has proven to be good business for the wedding jewelry industry.

Legalizing same sex marriages in other countries around the world has also been a trade booster to wedding retailers.

Same sex marriages and wedding ceremonies have changed the face of the entire wedding jewelry industry. But, how? This can be seen across the following fronts:

1. Legalization of LGBTQ weddings makes the industry worth $51 billion

The same sex wedding industry is now worth an estimated $51 billion as a result of increased spending. Same sex marriage was first legalized in the UK in July 2013 and then in the US in June 2015.

This goes to show that the spike in wedding ceremonies boosted revenue for the same sex wedding industry. Researchers proved that LGBTQ couples spend more on weddings than they do when they cohabitate together without a legal union. The legalization of same sex weddings endued gays and lesbians with spending boldness.

READ MORE:  Need A Beautiful Set Of Pearls For Your Bridesmaids?

Many US wedding retailers used to be biased against same sex couples. But the bias is now lifted since the government gave approval for same sex marriages in the US.

Most wedding jewelry retailers now accommodate wedding demands from the LGBTQ community. They now supply items and memorabilia that are exclusive to same sex couples. These items include wedding toppers and personalized inscriptions, among others.

3. The LGBTQ community created their own wedding ceremonies

If you think that heterosexual marriages are the same with those of the same sex community, then you are quite mistaken. LGBTQ couples are a community on their own. They have developed a set of wedding ceremony trends that are quite unique to their own statuses.

For instance, heterosexuals offer engagement rings after proposals. But this is not always the case in the case of same sex engagements. While many LGBTQs propose to one another, they do not often buy or present engagement rings.

Instead, many same sex couples present their lovers with costly wristwatches after proposing. They reserve the giving of rings for the actual wedding day.

Also, heterosexual couples specifically use men for groomsmen and women for bridesmaids. Same sex couples, on the other hand, often use mixed sexes for their groomsmen and bridesmaids. That means buying a different mixture of wedding jewelry as gifts for your party than traditional brides and grooms.

4. Most same sex couples buy wedding bands instead of rings

Most LGBTQ couples prefer to buy wedding bands instead of traditional wedding ring sets. They also go to the trouble of requesting that certain features be added to the bands. One of these features may be the multi-colors of the LGBTQ rainbow, like those seen on their signature rainbow flag.

There is another point to this: same sex couples prefer to buy their wedding bands from an online jewelry store rather than buying them from a brick and mortar jewelry store. This is because many gays, lesbians, transgenders, bisexuals, queers and “questionings” feel uncomfortable buying same sex wedding rings from local community stores.

The Pew Research Center conducted a 2015 study which revealed some very interesting facts about same sex marriages. Here are five we want to share with you:

There used to be general indifference against same sex weddings about a decade ago. But that has changed over the years. Following government legalization of same sex marriages, the general public now extends warm fellowship to these couples.

A 2015 Pew Research Center study finds that 62% of Americans support same sex marriages versus the 32% who oppose it.

2. Despite public support, there are still demographic divisions over LGBTQ marriages

It is true there is public support for same sex couples who want to get married. But there are still demographic divides along certain lines.

These demographic divisions run along religious lines and church affiliations including:

3. Same sex marriages continue to be on the rise

A 2015 Gallup poll revealed that 7.9% LGBTQ Americans are married to same sex partners. But this number jumped to 10.2% after the US Supreme Court legalized same sex marriages.

READ MORE:  What will Cause Pearls to be Different Colors?

Social researchers report that unmarried same sex couples have reduced by as much as 85% since 2013 in the UK. This goes to show that thousands of unmarried but cohabiting LGBTQ couples were waiting for legalization before stepping forward as “partners for life.”

Now that it has come across various countries, including here in the US, same sex couples are glad to demonstrate their love for each other through wedding ceremonies.

Just like most Americans claim they marry out of love, American LGBTQs also claim the same thing. They may have other reasons, but love is always credited as the most important consideration.

Some others marry because they require the legal backing for living together as same sex couples. This may be related to health insurance, 401K plans, buying a home together or even for wills and trusts.

5. The United States is one of over 20 countries that legalized LGBTQ marriage

More than 20 countries in the world, including the US, have legalized LGBTQ marriages. Some of the other countries include:

LGBTQ Weddings & Marriages: Changing the Way We Do Business in 2018

Same sex marriage has changed the face of the jewelry business, and the way Americans conduct business as a whole. This has led to a need for a same sex wedding jewelry industry that caters to the LGBTQ community.

The legislation approving same sex marriage has helped LGBTQs to encourage businesses cater to their needs. To this extent, it’s important that wedding jewelers not only attempt to create pieces that LGBTQ brides and grooms can relate to, but provides customized jewelry designing services they can count on.