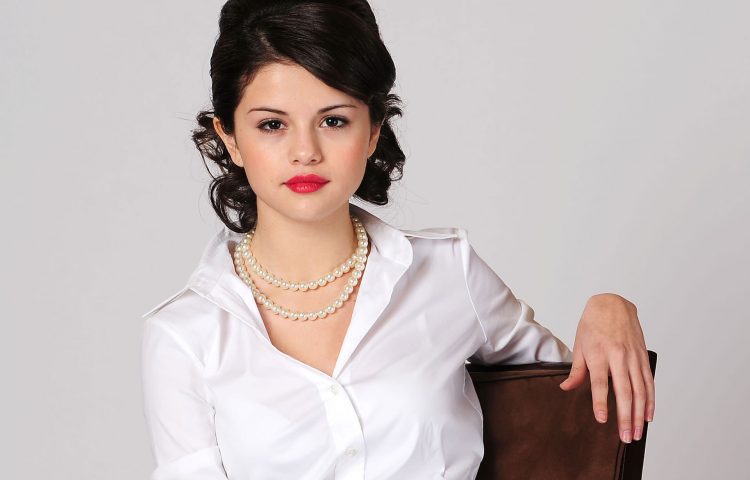 Selena Gomez is a celebrity with many looks. You’ll find her in everything from upscale attire to laid back gear.

But, for her everyday look, the singer prefers fashionable denim jeans, with a touch of classic pearls. Check out how Gomez cropped her skinny jeans below.

Although quite casual, she created a more flattering, sexy, trendy look in jeans.

Here, the Come & Get It singer is wearing dark wash skinny jeans. Some call this a retro look and feel. Yet, it’s still very fresh, modern and trendy, thanks to the skinny silhouette.

According to Nordstrom, Selena swears by her classic designer jeans. One fashion favorite is the J Brand skinnies, which she rocks with style. She’s been captured by paparazzi all over the place wearing her skinny jeans.

The 25-year old actress pairs them with everything from classic white tees, to chic bomber jackets.

How Do You Deal with a Breakup? …in Chic Workout Gear

Reports of Selena Gomez’s breakup with Canadian singer, songwriter, and record producer Weeknd had the Internet on fire! But, she’s been spotted by paparazzi many times since then. And, she doesn’t appear to be in mourning over the relationship at all.

From the look of things, Gomez is having no problems moving on with her life. She’s been spotted hanging out with her ex-boyfriend, singer Justin Bieber. They were captured taking a casual bike ride together. Who knows what that means? We can only guess.

Soon after, the hot, young star enjoyed a serious yoga session. And, what was she wearing? Ms. Gomez wore 90s-style chic workout gear. She looked amazing and sexy, even in a simple workout suit.

Gomez Takes on Puma… From Head-to-Toe

Selena Gomez has collaborated with the athletic and casual footwear designers known as Puma. And, she’s been sporting the brand’s gear all over the place with great pride.

At New York’s Rumble, Ms. Conchita attended a boxing session wearing a simple pair of Puma leggings with a crop top. Another time, she was spotted in Puma gear from head-to-toe. She looked both athletic and chic in her tiny track shorts along with a matching Puma sports bra.

Typically, most women fall into one of two categories after breaking up with their boyfriends:

Well, Selly falls under #2 since she broke up with her latest beau, The Weeknd. Back in September, cameras captured him wearing a colorful, oversized jacket while strolling through NYC with Selena. And, just recently, she was spotted, newly single, wearing the exact same coat in Studio City, CA as she rode around on her bike.

So, it appears that the “Wolves” singer has gotten over the breakup and is not looking back. She’s seems to be cool with it. As long as she has The Weeknd’s old, striped black and blue windbreaker, there seems to be nothing else to look back on for young Selenita.