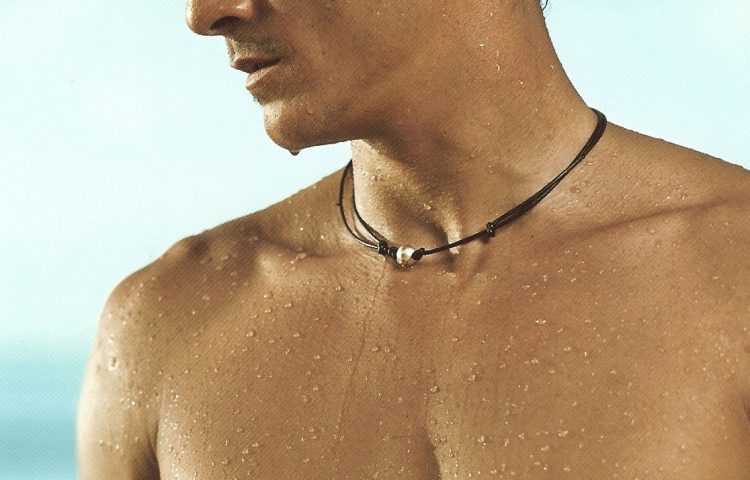 If you think women are the only fashion-conscious gender, you are terribly mistaken. Men are also quite fashionable too. They love to look good in their gear and their jewelry. In fact, sexy men wear pearls… and we have pictures to prove it!

There are hundreds of fashion accessories and jewelry for men out there. But, pearls are beginning to take the lead. This is largely because pearls are naturally created gemstones. Plus, they give the wearer a sense of fashionable pride. That’s why both beautiful women and sexy men wear pearls and pearl jewelry these days.

Today’s fashion trends are all about doing what makes you feel and look good. So, for men, it is high time we take notice of pearl accessories and jewelry adorned by them.

From Pierce Brosnan to Elton John, celebrity men are taking to high-quality pearls as a form of modest jewelry. Here are a few sexy celebrity men who wore pearls to events, what they wore with the gems and how they wore it.

A1 Bentley and Lyrica Anderson were together with friends Ray J and Princess. Both couples are stars on the VH1 reality TV show Love & HipHop Hollywood (LHHH). Here, they are captured in an LHHH episode entitled “Now or Never.”

Reality stars A1 and Lyrica had already engaged for nearly a year. But, Lyrica’s mother had not been too approving of their relationship. A1 shared with Ray J on how had planned to beat mama at her own game.

Here you see sexy music producer A1 all decked up in stud pearl earrings. The stylish man complemented the look with a bunch of pearl necklaces.

If you know anything at all about Kanye West and the Kardashians, then you know the entire crew likes to dress differently from the crowd. And, that was just what happened with Kanye’s fashion sense at the Met Gala. He wore a jacket made from bleached denim. He had it custom-embroidered with tons and tons of pearls and other precious stones.

Attending the event together with wife Kim Kardashian, Kanye decided not to sport the customary white tie. According to Olivier Rousteing, who designed the pearl studded jacket, Kanye’s iconic pearl-themed denim look took longer to design and make than Kim’s gown, which was designed like a suit of armor.

Steven Tyler is not new to iconic fashion. This was demonstrated recently when he sported a Nialaya ebony wood necklace with pearls.

Alice Cooper is not your everyday fashionista when it comes to rocking iconic accessories. And that is exactly the point when Cooper recently adorned a coin necklace engraved with the image of Alexander the Great and… you guessed it… pearls!

READ MORE:  Zodiac Stones - Fashion Tips to Bring Out Your Best Celestial Self

Jewelry firm Vincent Peach slaps a tag of $3,600 on the Tahitian pearl necklace. The Alexander the Great coin is an original silver Greek coin from between 336-323 B.C. It comes with a premium braided leather cord. The man-inspired pearl jewelry can feature a 13mm Tahitian pearl or Freshwater pearl.

Pharrell Williams is a musician who knows his stuff when it comes to music. He also carries himself well when it comes to his personal fashion style. A stringed pearl necklace was visible under the custom-made Karl Lagerfeld sweatshirt he wore along a street in Bristol recently.

Famous for his quirky sense of fashion, Pharrell Williams holds his own any time… any day. Just look how this sexy celebrity man is wearing his pearls.