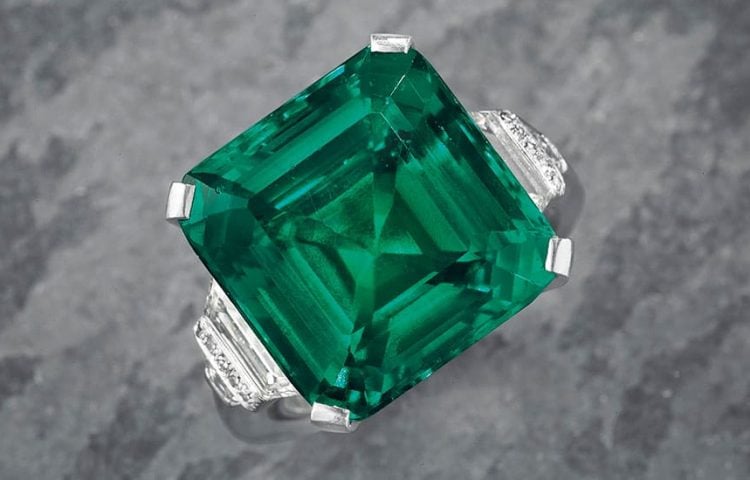 Gemstones are some of the earth’s most exquisite natural treasures. People all over the world have appreciated them throughout history, for different reasons. While they are most commonly used as decorative ornaments, they are also known for their religious symbolism. Such gemstones have always been valued for their supposed healing powers too. Whether it be a diamond, ruby, or sapphire, all gemstones possess a distinct beauty. It makes each special in its own way. Despite this, the fact is that some gems are rarer than others. That’s a factor that significantly impacts their value of them. Other important factors include size, grade, and color. Here is the list of the 10 most valuable gemstones in the world.

10 Most Valuable Gemstones in the World

These gemstones made it to the list because they have the highest prices per carat.

We begin our list with Tanzanite, a gem which was first discovered in 1967. As you may have guessed from its name, Tanzanite is only found in northern Tanzania, in the foothills of Mount Kilimanjaro. Tanzanite became popular after Tiffany and Co. began using the gem in their jewelry. This gemstone features a deep blue-violet hue that is distinct from one of the sapphires. While $1,200 may not seem like such a high number (especially compared to the other gems on this list), the market expects it to skyrocket in the next 20-25 years. That’s mostly caused by the depleting supply of tanzanite.

What gemstone is most valuable?

What is the most rare gem in the world?

What stones are more valuable than diamonds?

Black opals are the most desired and valuable opals in the world. The stone features a dark body which provides the perfect backdrop for the extraordinary play of colors. Black opals come almost exclusively from Lightning Ridge area in New South Wales. They are, indeed, widely considered one of Australia’s national treasures. The “Royal One” is the most precious black opal in the world, valued at $3 million. The elusive gemstone weighs 306-carats. In fact, it went unreported for 14 years before the miner who had discovered it decided to sell.

FACT: The Queen of England’s jewelry collection is worth an estimated $57 million dollars and it includes 300 items of jewelry. The Crown Jewels are priceless, but estimated at $4 billion.

While red beryl has been found in Utah regions, New Mexico, and Mexico, only those mined specifically in the Wah Wah Mountains of Utah have been of gem-quality. They exhibit a few different shades of a darker red color, all of which are equally mesmerizing. This variety is one of the rarest in the beryl family, which emeralds are also a part of. As a result, red beryl is sometimes referred to as the “red emerald” by collectors. Similar to emeralds, red beryls also often feature inclusions and fractures. Prices for this uncommon gemstone can reach up to $10,000 per carat, but that’s only if you can find one for sale.

Musgravite is another gemstone that was first discovered in Australia in 1967. The name comes from the Musgrave region where it was found. In 2005, only eight gem-quality musgravite stones were mined. That shows exactly how rare it is. The handful that was found included colors that range from translucent olive green to a greyish purple. Due to its exceptional rarity, it’s difficult to put a price tag on this gemstone. Although, experts generally value it at close to $35,000 per carat.

Alexandrite is a rare gem that changes colors. This not only makes Alexandrite unbelievably beautiful but also valuable. Though they are primarily found in Russia (discovered in 1833), they’ve also been mined in Sri Lanka, Tanzania, and India. Interestingly, they are almost always found in sizes smaller than one carat. Thus, when a bigger stone is up, the price value goes up exponentially. For example, they can cost $15,000 for a single carat, but up to $70,000 per carat if it’s a larger stone. The Smithsonian Institute owns what is believed to be the largest faceted Alexandrite in the world, a cushion-cut stone weighing 65.08 carats valued at over $4 million.

Emeralds are some of the most popular gemstones in the world, known for their exotic green tones. Found primarily in four different countries: Brazil, Colombia, Zimbabwe, and Zambia. Most emeralds available on the market feature minor imperfections. Thus, in the rare opportunity that a natural emerald without flaws goes up for sale, it can fetch mind-blowing figures. When Christie’s announced that the historic “Rockefeller Emerald” would be auctioned off, experts knew it would break records. The 18.04-carat gemstone got purchased by John D. Rockefeller for his wife. Later, it was passed down to their son and then sold privately. At the Christie’s auction, it was purchased for $5.5 million, or $305,000 per carat. That made it the most expensive emerald per carat ever sold.

READ MORE:  Earring Style Guidebook: Everything You Need to Know About the Different Types of Earrings

Commonly referred to as the “King of Gemstones,” rubies feature a spectrum of vibrant red hues. They range from pink all the way to a darker red. The fiery gem is a symbol of passion and a zest for life. This meaning has been passed down through ancient cultures who believed the color represented blood. In 2015, an extremely rare Burmese ruby was auctioned off at a Sotheby’s event in Geneva for over $30 million. This meant the 26-carat gem, named “The Sunrise Ruby” after a poem by the legendary 13th-century poet Rumi, sold at $1.18 million per carat. That’s a staggering number which makes it the most expensive ruby ever sold.

In 2011, a necklace from the 16th-century known as La Peregrina sold at a Christie’s auction for $11.8 million. The necklace features rubies, pearls, and diamonds. As evident with the La Peregrina, jewelry which combines pearls and other gemstones is quite captivating. Pearls highlight the beauty of other gemstones and bring a unique glow to the necklace. Browse through our collection of gemstone pearl jewelry to find your personal own La Peregrina.

While all colored diamonds are rare, pink diamonds are arguably the rarest of them all. In the annual production of diamonds throughout the world, these pink-colored gems represent less than 0.1% of the total! When the elegant pink gemstones make it to auction, they regularly break the $1 million mark for price per carat. In 2017, a stunning pink diamond weighing 59.60-carats was sold at a Sotheby’s auction in Hong Kong for a record-breaking $71.2 million. That’s $1.19 million per carat. Known as the “Pink Star” diamond, it’s the largest Fancy Vivid Pink diamond ever graded as Internally Flawless by the Gemological Institute of America.

Jadeite is the purest, rarest, and most vivid gemstone in the Jade family. Though it’s available in a variety of colors including red, yellow, and black, green is most common with the stone. A specific shade of semi-transparent emerald green known as “Imperial Jade” is the most sought-after in the world. Jadeite plays a particularly significant role in Chinese culture, symbolizing prestige and status. In 2014, everyone expected a jadeite necklace that once belonged to American heiress Barbara Hutton to set a record for most expensive Jadeite jewelry ever sold. The “Hutton-Midivani Necklace”, which consists of 27 large, top quality jadeite beads, did just that. After twenty minutes of intense bidding from eight potential buyers, the piece sold for $27.44 million to Cartier, the original designer of the necklace.

FACT: The largest loose diamond in the world is the Paragon Diamond, weighing in at 137.82 carats, while the Pink Star Diamond is the most expensive gemstone to ever be sold at a whopping $83 million.

We finish off our list with one of the most legendary gemstones in the world, the blue diamond. Given its rarity, anytime a blue diamond is set to appear at an auction, the world’s top collectors line up for a chance to own one. They are more than willing to spend millions of dollars to make it happen. This was certainly the case in 2016 when a jaw-dropping emerald-cut Vivid Blue diamond weighing 14.62 carats came to Christie’s Magnificent Jewels auction in Geneva. The diamond, named “The Oppenheimer Blue” in honor of its previous owner, sold for a final price of $57.5 million. While the Pink Star diamond broke its record for most expensive jewel ever sold, the blue diamond holds the record for the most valuable price per carat at $3.93 million.

In 2013, a seven-strand necklace that featured 614 natural pearls sold for over $9 million at a Christie’s auction, making it one of the most expensive pearl purchases ever. While spending millions on a necklace may not be possible, it’s okay to have an appetite for luxury. If you want the crème de la crème of pearls, then South Sea pearls are the perfect option for you. Regarded as the most premium type of pearls available, they feature stunning size, color, quality, and glow.

There you have it—the 10 most valuable gemstones in the world. If you could pick one, which one would you choose? Important to note, while these gemstones might be the most expensive ones, they aren’t necessarily the most special. For example, pearls are the only gemstones to come from a living creature. A pearl necklace is also one of the most classic pieces available that can perfectly finish any outfit. Next, while turquoises might not as be as rare as red beryls, their beauty is one-of-a-kind. And finally, though topaz isn’t the priciest gemstone, its wide range of colors make it unique in its own way. Whatever stone you decide to go with, choose the one that’s special to you.