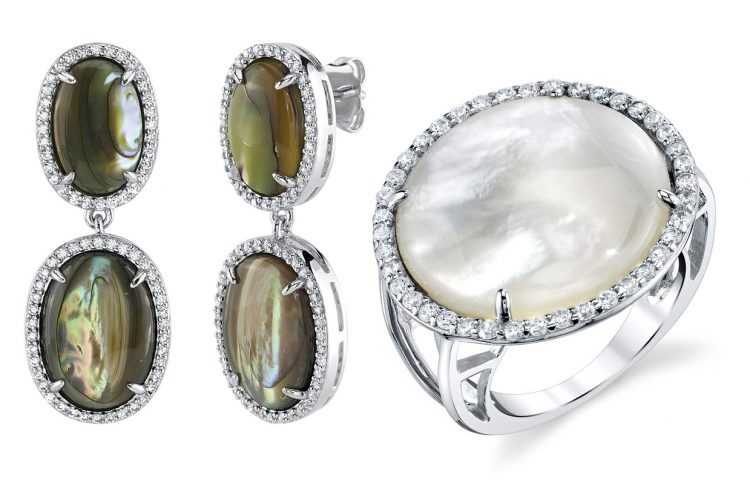 Many people would recognize mother of pearl when they saw it, but how many of us actually know what this material is, where it comes from or how it is made? Or, more specifically, how many know the difference between mother of pearl and pearls?

Mother of Pearl: The Basics

Unsurprisingly, pearls and mother of pearl are made of the same substance: nacre, an iridescent material composed of calcium carbonate.

Nacre is created by mollusks to protect their soft interior tissue. The difference between pearls and mother of pearl is placement, with the latter being formed on the inner linings of a shell.

A pearl, on the other hand, is created when a foreign object enters the shell and the mollusk encases the foreign object in order to protect itself. The material used to create the encasement is the same nacre, also called mother of pearl.

The end result of this foreign object being encased in nacre is a round-shaped pearl, whereas mother of pearl takes the shape of the shell that it lines.

FACT: Mother of pearl is believed to have stress-relieving properties, bringing calmness and stimulating intuition and creativity, especially when worn together with Rubellite, a red to pink gemstone from the family of tourmalines.

Like pearls, mother of pearl comes in stunning color variations, from white to silver, steel blue, green, bronze or even black. If you love iridescent black finishes, make sure to complete your jewelry collection with a stunning mother of pearl jewelry piece, suitable for daytime and nighttime attire.

READ MORE:  Could India be the new player on the world’s pearl scene?
Shop Mother of Pearl Jewelry

How Does Mother of Pearl Get Its Iridescent Appearance?

Have you wondered about the source of mother of pearl’s iridescent appearance? The answer is in the nacre material itself, which is secreted by the epithelial cells. The epithelial cells secrete thin platelets, or building blocks of nacre.

Thin platelets of calcium carbonate secreted by the mollusk have a width which matches that of many light waves. This is what gives the nacre its unique beauty, sought after in the creation of everything from pearl jewelry and watches to furniture.

When the iridescent material is set in metals and other jewelry pieces, only a thin layer of the sediment is used, similar to a boulder opal. Jewelers can then cut or carve the substance into various shapes.

This allows the creation of striking, unique jewelry pieces that truly depict the beauty of nature itself. Iridescent, with a discreet yet mesmerizing shine in any light, mother of pearl makes a great choice when you aim to add a touch of dazzle to any look, be it daytime wear or evening wear. Like pearl necklaces and pearl earrings, mother of pearl designs have the power to enhance your natural glow instantly.

FACT: Back in the 1880s, many Costermongers, namely the leaders of London street traders, used an abundance of mother-of-pearl buttons to decorate their suits.

Both pearl and mother of pearl jewelry fall under the category of organic jewelry.  These are pearl jewelry pieces made with gems that originate from living organisms, plants or creatures. However, there are some major differences between the two.

Mother of pearl jewelry looks very different from pearl jewelry in various ways. Jewelry pieces created using nacre are generally large-sized focal pieces, because they tend to take up the entire interior of the mollusk shells. Moreover, they are almost always placed in fine jewelry settings.

Jewelry pieces made with pearls are generally crafted by drilling holes in the gemstones, and stringing them together, rather than setting them. And, since pearls tend to only grow to certain sizes, these jewelry pieces are usually smaller and contain rounded, thick gems.

The Test of Authenticity

Wondering whether or not your mother of pearl jewelry is real of fake? Well, you can use the pearl tooth test to check for authenticity. Simply tap the gem against your teeth. If it’s plastic, the bead will create a muted sound, whereas the real deal will “click” instead.

Click here to learn more about the pearl tooth test.

In most cases, alloys are used to make jewelry pieces. Some people are allergic to copper and nickel, which can lead to chemical reactions. This tends to cause the jewelry to fade and/or change colors.

Pearls are 100% hypoallergenic gemstones. Therefore, it’s very rare for a person to suffer an allergic reaction to mother or pearl and pearl jewelry. As one of the safest and most lustrous gems to wear, pearls and mother of pearl are not only one of the most stunning miracles of mother nature, but also a great symbolic addition to any look, from casual ensembles to office outfits and evening attire.